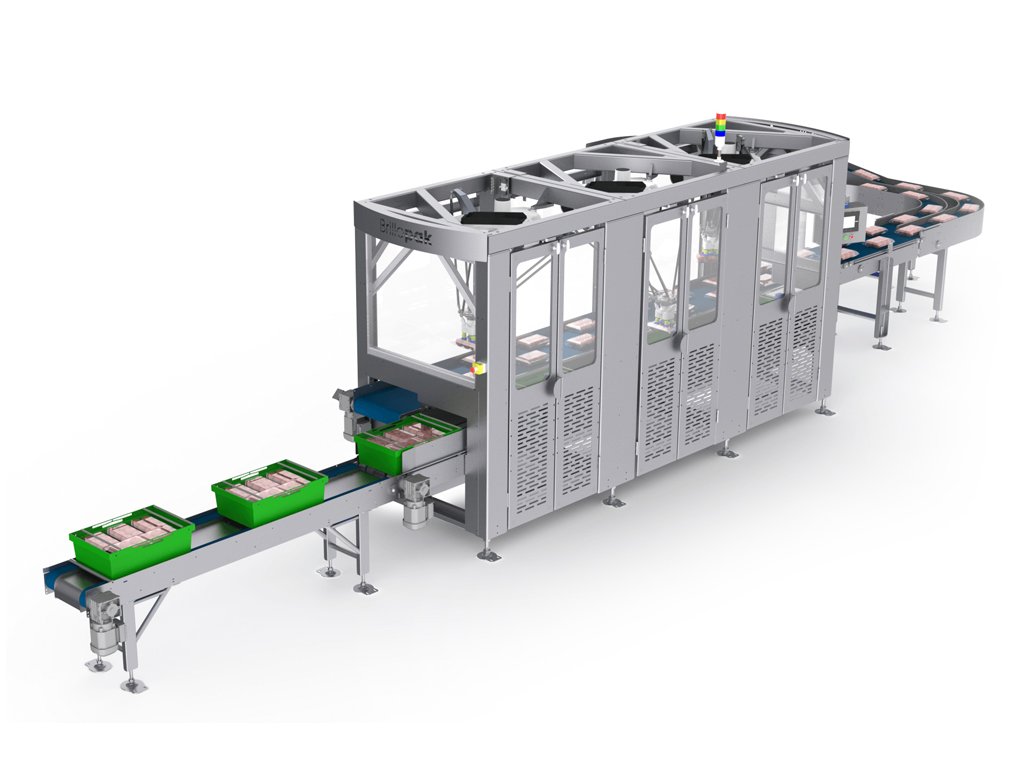 Brillopak has added a triple robot configuration to its popular UniPAKer packing system.

Brillopak has developed its award-winning UniPAKer robotic crate packing platform with the introduction of single and triple-head versions of the system, following the success of its dual robot cells in fresh produce applications. The ability to incorpo-rate one, two or three parallel arm delta robots into a single crate packing cell ena-bles the design of flexible systems that strike the optimum balance between speed and gentle handling.

“Whilst delta robot heads might boast mechanical speeds in excess of 120 picks per mi-nute, such high speeds can only be achieved in real life on very straightforward crate/case packing applications such as packs of biscuits. It is very unlikely that any packaging automation supplier who is handling delicate or awkward products like flow-wrapped apples, bags of carrots or tray-sealed meat would be able to achieve anything close to those kinds of speeds without damaging the product in the process, it simply isn’t possible,” says Peter Newman, Technical Director at Brillopak.

He continues: “That is precisely the reason why we have developed single, dual and triple robot configurations for our UniPAKer packing system – to help our customers meet their performance and payback objectives without making false promises.”

Working on the premise that most fresh produce packs – whether punnets of soft fruit, bags of sprouts or flow-wrapped packs of peppers – can be packed into crates using a single robot head at speeds of 30-40 packs per minute, the UniPAKer can double or triple those speeds to achieve a customer’s target by adding a second or third robot. Each ro-bot takes it in turn to take a pack off the infeed conveyor and position it precisely in the crate, so the desired crate presentation is achieved twice or three times more quickly than with a single robot. To maintain a compact footprint, simplify operation and minimise capi-tal outlay, the entire system is centrally controlled and the robots share a vision system, infeed and outfeed, regardless of whether it is a dual or triple configuration.

The 70-80 ppm speed capabilities of the dual-head UniPAKer are the perfect match for flow wrapping lines handling fruit and veg such as apples, sprouts, tomatoes, peppers and pears, with or without a supporting tray.

When three heads are better than two

The triple-head system has been conceived with difficult-to-handle or bulky products in mind. Brillopak is currently building its first triple-head UniPAKer cell for a supermarket customer with the goal of packing bags of carrots into plastic retailer crates at speeds of 100 ppm.

Carrots are a difficult product to handle as each bag of the same weight is a different shape and size, therefore the robot has to slow down to perform the pick and position the pack in the crate; too much speed will result in the bag falling out of the gripper or an un-tidy crate presentation. Using a single robot head in conjunction with a flexible finger grip-per, the UniPAKer can handle carrots at speeds of 37 ppm per head. A triple-head sys-tem can achieve over 100 ppm, which should enable the customer to meet its two-year payback target.

Another potential application for the triple-head UniPAKer is for placing products such as peppers into the pocket of the flow wrapper. Using three robots operating at 60 picks per minute, the UniPAKer would be able to match typical flow wrapper speeds. 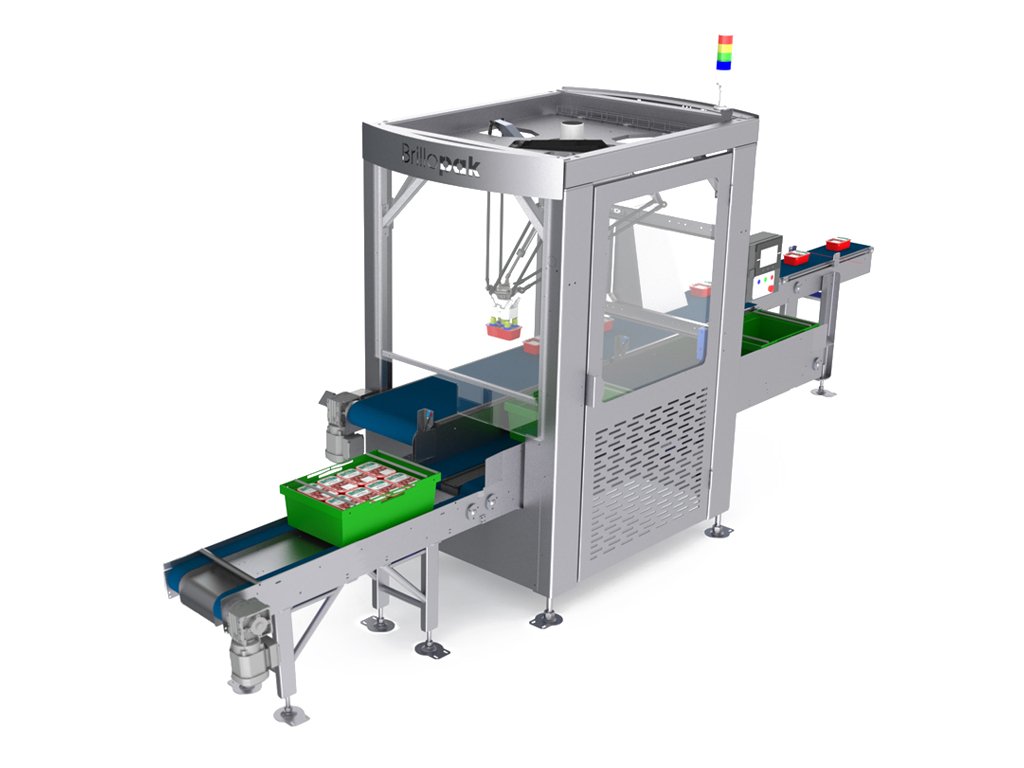 Brillopak has added a single robot configuration to its popular UniPAKer packing system.

However, adding another robot is not always the best approach for increasing packing speeds. In applications where the product is fairly straightforward to pick, a single robot with a multi-pick head might be a more cost-effective and space-efficient option. In this configuration, the robot performs two picks, then places the packs in the crate, two at a time. This design works well for tray-sealed meat packs, which are uniform packs with flat surfaces, but cannot be handled at very high speeds as the film lid may tear. Speeds of 60-70 ppm can comfortably be achieved on this application.

Brillopak’s UniPAKer robotic pick and place cell was originally engineered for packing bags of potatoes and apples into crates. Designed to handle VFFS, tray-sealed or flow-wrapped packs up to 1kg, the UniPAKer has been proven over-and-over again to improve productivity and improve pack presentation on shelf.

← Previous Next →
We use cookies to ensure that we give you the best experience on our website. If you continue to use this site we will assume that you are happy with it.AcceptDeclineRead more