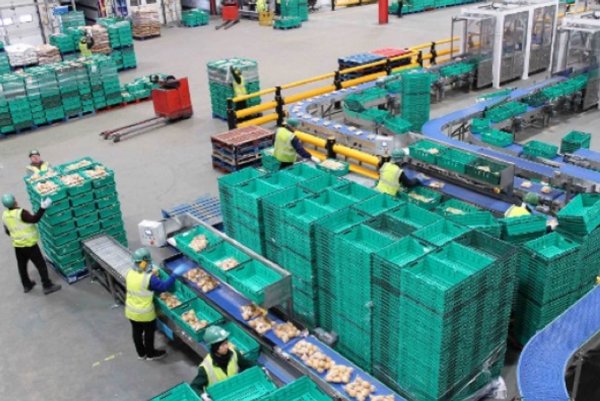 Replacing the manual turntable-style potato case loading system at Morrisons’ Rushden depot with two award-winning Brillopak PakStations has boosted packing speed. Most importantly, the systems have made the job more manageable and ergonomic for the team members performing this repetitive end-of-line task.

Having automated two packing lines around the same time, site manager Andy Day says that the thing that shocked him most about the PakStation was “how much it transformed the efficiency and tidiness of the packing line and surrounding area.”

From the outset, the Rushden team was resolute that the turntable had to go. “It wasn’t right for the 66 million kilos of potato packs that are processed by the depot annually, or our people that had to bend, twist and turn to maintain a consistent packing pace,” states Andy.

The rate in which potato packs come through the back end automated packing system previously meant operatives manually loading straight from the lines onto conventional pallets, simply couldn’t keep up. Not only was the backlog a team stressor, packs would start to pile up and bump around the roundtable. Presentation of the packs in the crates was also erratic.

Andy recalls: “Every time a pack rotates around the table, it’s moving. The longer it sits on the roundtable and moves for, the greater the risk of product accumulations. This can lead to bags dropping on the floor, product damage, split bags and waste. Obviously, this doesn’t align with Morrisons fresh produce quality strategy.”

Being a seven-day-a-week operation handling up to 14 product SKUs at any one time, extra capacity was clearly needed. Yet, physically fitting more people around the turntable to pack faster was unfeasible. Space just wouldn’t allow it. 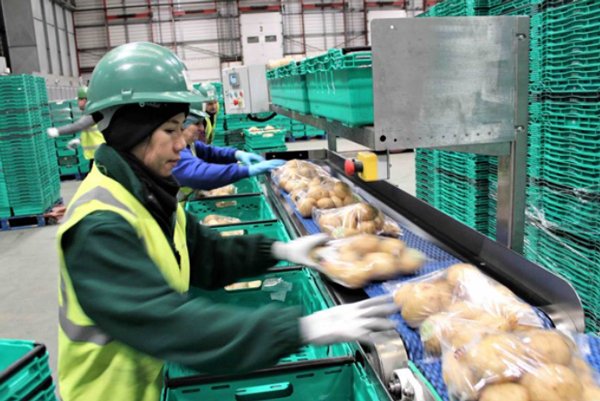 Protecting workforce welfare by reducing the duration people work on a specific task, coupled with enhancing comfort during the pick and pack process were among the key catalysts for introducing semi-automated packing, reflects Andy.

He explains: “During peak times we operate four packing lines in 12 hour shifts. Like-for-like we still employ the same volume of people on the manual lines. Only now, we tend to use a smaller pool of people and have the option of rotating them between packing, crate separation, palletising and the robotic lines, which offers them greater job variety.”

Andy estimates that the site’s reliance on agency staff has reduced by around 40%. He believes that some of this could be attributed to fewer staff absences as a result of the more ergonomic system.

“There’s certainly some correlation between having a core team of people that are familiar with the system and the camaraderie that people build when they work together daily. It’s very evident that our pack team now shares a stronger work ethic,” adds Andy.

To improve how packs were presented to the manual packers and consequently presentation within the retail crates, the Rushton team worked collaboratively with Brillopak to engineer two modified PakStations. A hybrid version of five apple PakStations installed by Morrisons at the Thrapston depot several years ago, Rushden’s modified design guarantees pack orientation to the workforce that collate the trays. Rather than clusters, packs come through in single file. This helps to guarantee consistent presentation of packs within the trays.

Additionally, the design of the PakStation lines helps to mitigate repetitive strain injuries and makes the whole manual packing process seamless. “Our colleagues find it much more ergonomic,” states Andy.“They’re not bending over or moving around the turntable or repeatedly lifting trays.” 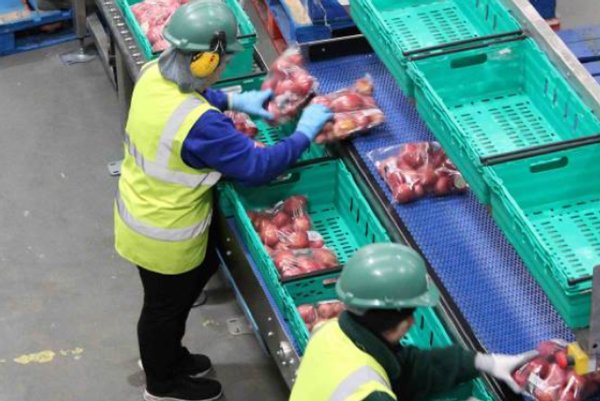 By arranging two Brillopak PakStationsstaggered back-to-back means one operative can feed a continuous stream of crates to both packing lines concurrently, and remove filled crates placing them on the conveyor for palletising. Because this is done at the rear of the machine, crate clutter is minimised. Rather than doubling up the role, one crate feeder is deployed elsewhere in Rushden’s facility.

The lines, which are located in a busy warehouse, adjacent to the robotic installation, has also helped the team to introduce clear work zones, further reducing trip hazards. The consistent packing speed and fewer front to back end bottlenecks means that OEE across the whole packing zone has improved.

For additional flexibility, the two PakStation lines can be converged to run through the robotic cells. Having an equal split between robotic and semi-automated pack lines means that Morrisons can move labour around and scale up production to accommodate seasonal demands.

Each PakStationsystem features its own colour touchscreen control panel. This enables operatives to control and adjust the speed in which product is presented from the flow wrap system. “It’s so straightforward to use that I’m never worried about pressing the wrong button and breaking the system,” comments Dave, a longstanding packhouse operative.

Last year the system won the PPMA 2018 Group Award for Innovative Packaging Machine. Industry judges commented: “The strength of the PakStation lies in its optimisation of manual human labour rather than trying to replace it completely. This gives a best of both worlds scenario along with reduced damage to product. Impressively short payback time and overall equipment performance improvements.”