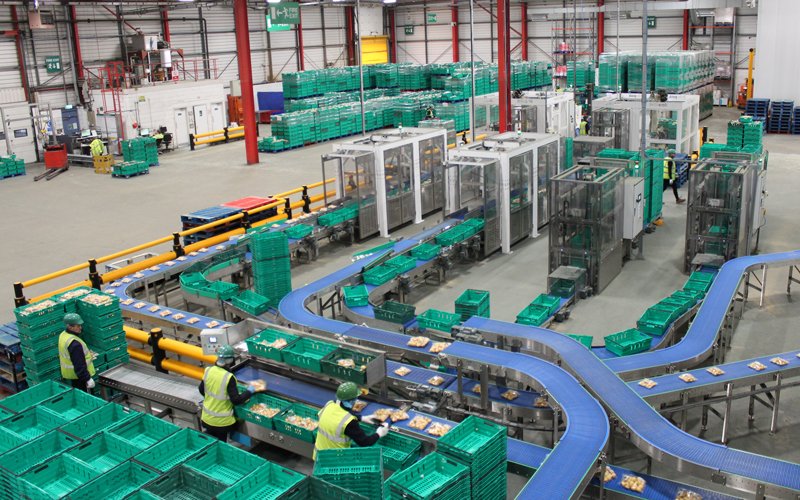 Believed to be Europe’s first single pick potato packing cell, the UniPaker robotic pick and place cell was engineered by Brillopak in collaboration with the Rushden team. Designed to improve product handling, minimise waste and enhance the presentation of pre-packed potatoes for the 11 million consumers that shop weekly at Morrisons, the clever robot adopts a brand new automated technique for gently loading vertical form fill and seal (VFFS) and flow wrap bags into retail crates.

At speeds of at least 75 packs per minute for each cell, the two UniPaker systems cradle bags of potatoes, each weighing from 0.5kg up to 2.5kg, loading one at a time into crates, following multiple sets of presentation formats. The installation, which forms part of a warehouse-wide efficiency improvement investment, has resulted in a 90% reduction of labour.

Both UniPaker case loading cells house two high-payload Omron Delta type robots. Working simultaneously alongside each other, the robotic spider arms deftly loads potato packs individually into crates in set patterns at the programmed orientation. The robots do this with a degree of dexterity and rotation that would not be feasible with a layer-based automated handling system.

Clean, empty crates are fed automatically into both cells at a constant pace by two Brillopak Crate DeStaker systems. Once filled, the crates are stacked and palletised by an end-of-line robotic system. 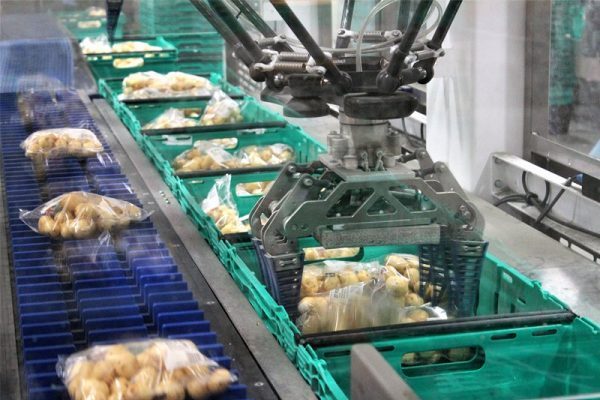 Brillopak designed the mechatronic Glove end effector to top load packs into containers in a different angle to how they are picked up.

Mechatronic hand that protects the pack

Because of the design of the end effector it can be used to load Morrisons entire potato product range. Likened to a glove, the end effector works by enveloping each potato pack. By doing this it can accommodate the different sizes, weights and pack lumps for Morrisons’ extensive range – exceeding 14 SKUs in a typical season – without having to swap the tooling over.

For site manager Andy, the new glove concept has more than proved its capability. “With the level of air that’s in potato bags it was hard to conceive that a robot hand could load crates at such speed without popping or piercing the bag and damaging product.”

“Previously, pierced bags has been one of the downsides to using grippers on automated case loading systems,”says Brillopak director David Jahn. “Additionally, when layer picking grippers or bomb bay doors release potatoes into trays, they are typically dropped in a haphazard way above each tray in order for the tooling to have space to open. Not only does this damage the product, the presentation is quite hit and miss.”

David adds: “Suctioning polybags of heavier potatoes with varied shapes is equally challenging. Because it’s not a smooth surface, bags frequently sag and drop onto the packing conveyor, causing the packing line to stop. These frequent line stops have a significant impact on line efficiency and ultimately bottom line profit.”

Rather than using stainless steel, which would add to the weight being repeatedly lifted, Brillopak designed the end-effector using soft food-grade material. 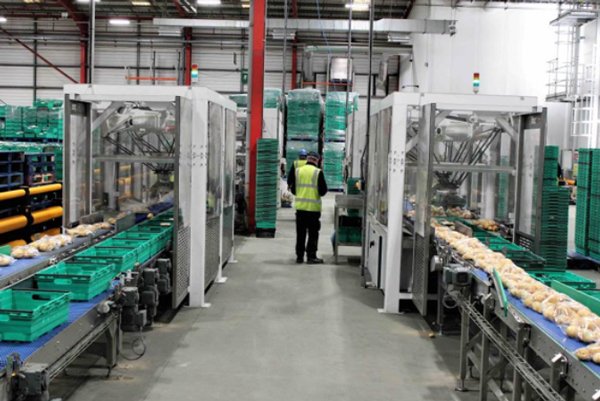 Each Unipacker packs multiple products with no need for tooling changeover

For this Morrisons potato packing line, Brillopak installed two specialist four-arm Spider (Delta) robots within each robotic cell. Each robot has a payload of 5kg, including a head with rotation functionality. In most fresh produce applications a three-arm robot will offer sufficient payload highlights David.

With a reach of 1130mm – 30% more than similar sized robots – the UniPaker system delivers dexterity in a compact footprint. Rumble conveyors settle the packs and deliver them in single file into both robotic cells, ready for automated case loading.

“Brillopak’s robot is impressive to watch. It never misses a beat and is capable of orientating packs quicker than any person is able to do,” comments Andy

This level of presentation precision was one of the key drivers behind automating the case loading operation at Rushden. Previously, potato packs were loaded manually into crates. It was labour intensive, incurred packing bottlenecks and resulted in messy tray presentation. 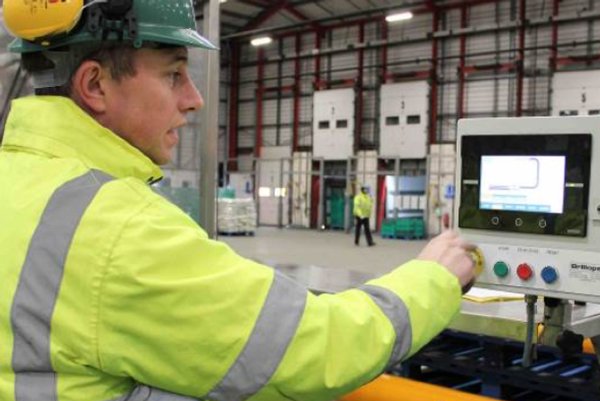 Having worked on both the manual packing and now automated lines, machine operative Dave reflects on the differences the robot cells have made to workers and waste.

Noting that the UniPaker cell is much more product and user friendly, Dave comments: “By removing 90% of the physical labour from the packing production area, health & safety and people’s approach to teamwork has improved. It’s a much calmer environment and so much better for staff welfare. It’s almost hypnotic to watch when the robots are running.”

Additionally, with the introduction of the robotic lines and glove end effector, Dave reports less product rework as a result of split bags.

Describing the robot lines as easy to operate, Dave says the system set up and HMI is intuitive to use, particularly for product changeovers. Having been involved in writing guidelines for team members to reference he affirms: “It’s so straightforward to use that I’m never worried about pressing the wrong button and breaking the system!”

Forming part of a site-wide investment in front and back end manufacturing improvements, the Rushden site has seen improvements in Overall Equipment Effectiveness (OEE).