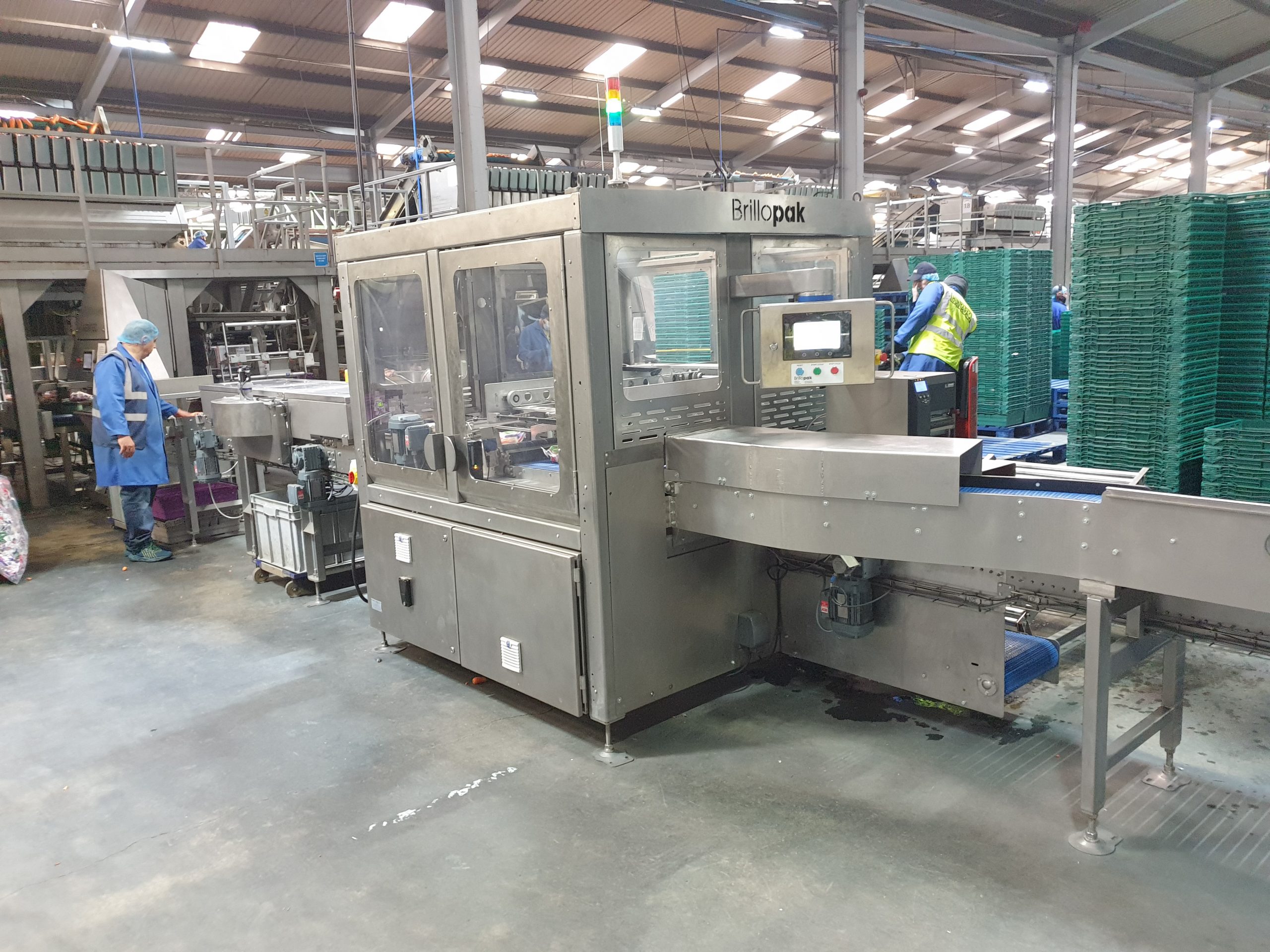 Founded during WWII, family-run carrot farmer, now one of the largest in Europe and supplier to most of the major British supermarkets since 1974 (including Tesco and M&S Food), regards itself as a pioneer. Now, Will Hunter – a robotics advocate since the age of 16 and fourth-generation operations director – is leading a new mission to introduce the best quality control, process and packaging technology to boost productivity, with the fastest ROI.

Will Hunter explains: “There’s an accepted truth within the farming community that automation can address labour shortages and improve how packs are presented into retail trays. Despite this, it can be hard for many to justify a seven-year ROI on traditional pick and place robots.” An accumulation system based upon Brillopak’s PunnetPAKer design with an innovative retractable overhead push and slide mechanism more than halved the ROI and answered this conundrum.

Having spent several decades working with industry leaders and fresh produce customers to successfully overcome packing automation and quality control issues of this nature, Brillopak was the right firm for the job. The company’s specially-adapted BR2 vegetable packing machine allows Huntapac to run different sized and weighted carrot packs, from 500 grams to 1.5 kilograms, smaller Chantenay carrots, and even parsnips, as well as different packaging materials including new recyclable substrates. All without incurring time delays by switching robot end effectors. 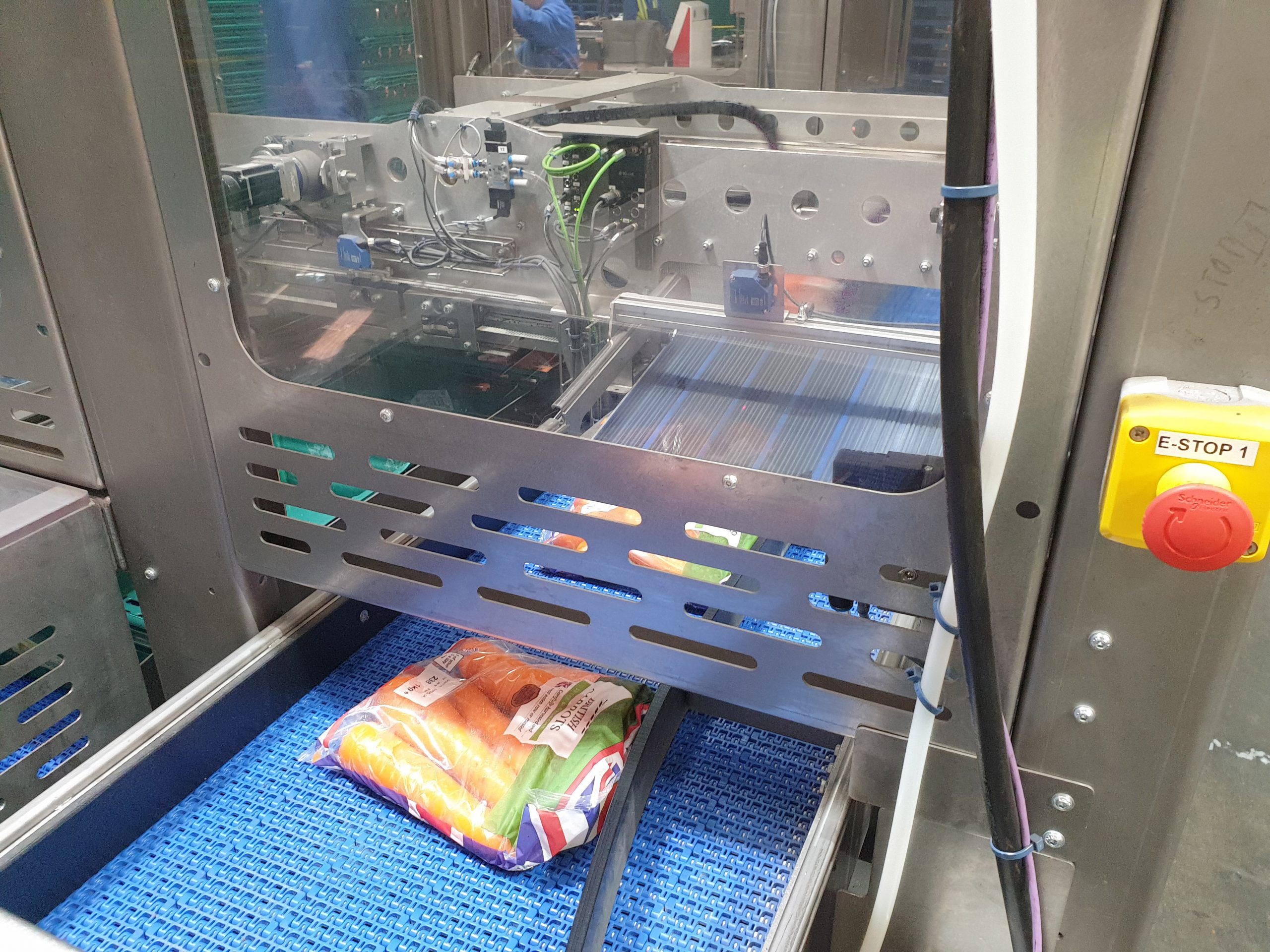 Huntapac’s merging system and bag flippers ensures that each carrot pack is horizontally aligned before being fed into the Brillopak case packing machine.

Presenting up to 80 carrot packs per minute into retail trays, Huntapac replaced one of its traditional rotary table, manual crate packing lines with the automated system earlier this year. Operating 16 hours a day, five days a week, 1200 tons of carrots are graded, washed, polished, cooled, optically graded by size and quality, packed and checkweighed. Once loaded into the cases, the carrots are then transported to a cold store, ensuring the vegetables stay fresh and maintain their high quality before distribution across the country to fill the supermarket shelves.

Previously reliant on manual labour to maintain a constant case-loading pace, now a disparate, unconnected bagging and checkweighing system has been fully integrated into the BR2 case packing system. “By uniting all the electronics up the line, the machines all communicate with each other via a common control platform installed by Brillopak. This helps to pre-empt bottlenecks, address production lags and respond instantly if packs get trapped. Should any of these events occur, the upstream packing and checkweighing machines slow or stop automatically until all the processes are in-step with each other again,” explains Will. “The speed is very much governed by the processing speed of our baggers and checkweighers. Although the case loader is capable of going faster, we wouldn’t want it to compromise the quality of our produce,” adds Will.

With most carrot crates destined for supermarket shelves, consistent display presentation of the carrots, face up and positioned straight up with the branding and labels clearly visible to consumers is vital. Huntapac’s existing merging system and bag flippers ensures that each carrot pack is horizontally aligned before being fed into the Brillopak case packing machine.

Four packs are then presented individually onto a collation support plate, nudging each one along until there are four slightly overlapping packs. Director David Jahn describes the sequence: “The concept follows a similar principle to a coin pusher arcade game. As one lands on the previous pack, gravity pushes them over to create crate-ready layer.

As soon as the four packs are in position, a side load slider gently pushes the carrot packs onto a flap opening device located directly above the crate. Simultaneously to the carrot packs lowering into the crate, the slider flap lifts, retracts overhead and drops behind the next set of carrots, pushing next accumulation towards the crate flap.

The flexibility of the system assists Huntapac to respond to the seasonal peak demands, including the packing of parsnips – another core part of the grower’s business. The night shift also regularly runs smaller Chantenay carrots on the line. 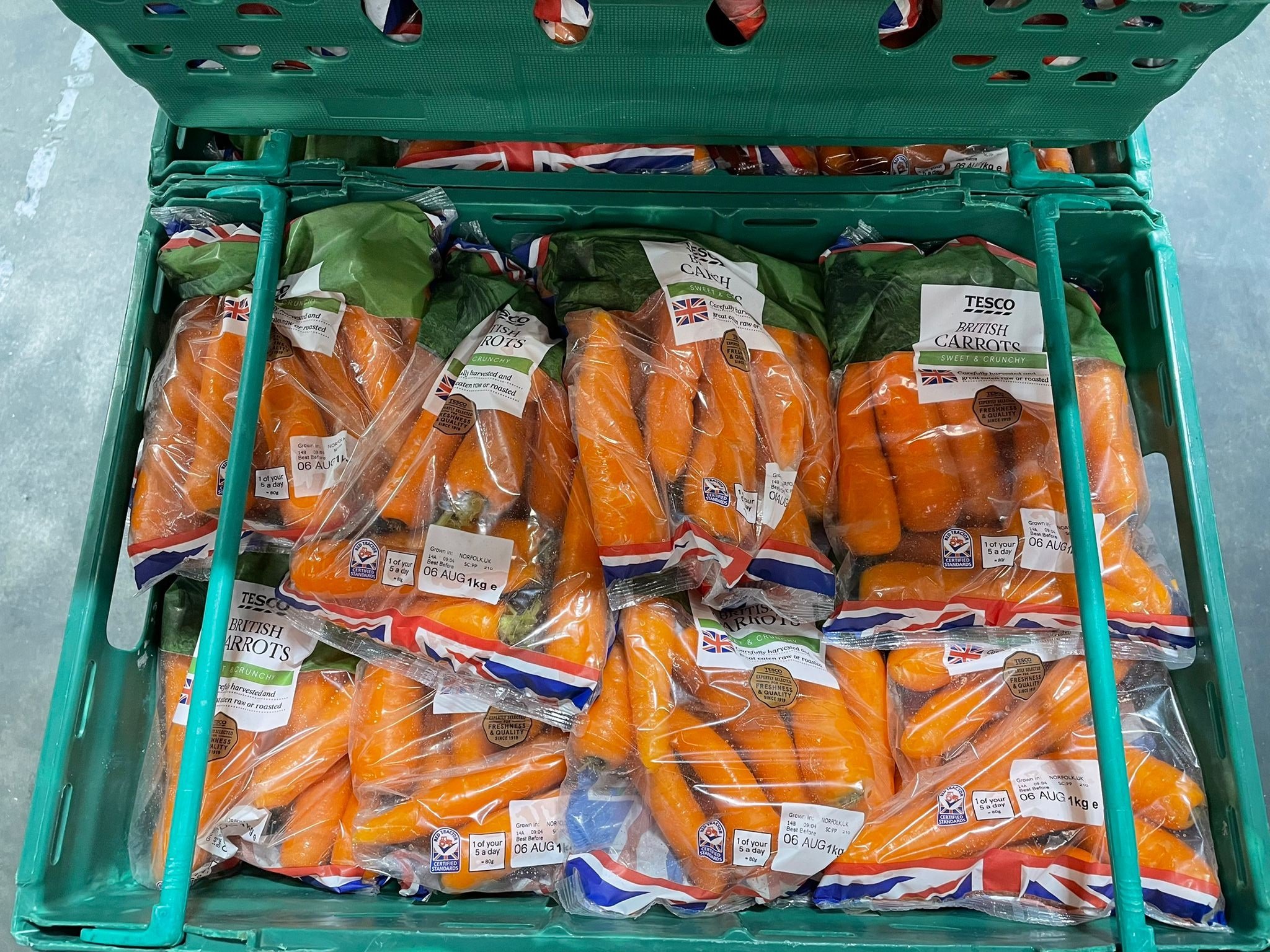 With most carrot crates destined for supermarket shelves, consistent display presentation of the carrots, face up and positioned straight up with the branding and labels clearly visible to consumers is vital.

With Brexit and COVID compounding the resourcing issue, moving from a fast-paced labour intensive crate loading operation to an automated system has been welcomed by the farm. Better staff satisfaction has been observed by Will: “Because we are removing the reliance on agency staff, our productivity per person has significantly increased. Our core Huntapac packhouse team was excited to see the machine go in and felt really connected to the project and the wider benefits of eliminating labour intensive routine activities of this nature. The wellbeing, safety, motivational and upskilling advantages were evident from day one.”

Although crate insertion and removal is currently performed at the end of the cell manually, the carrot farmer hasn’t ruled out automating the crate destacking and palletising phase to complete its packing automation cycle in the future.

As an extremely marginal business with little to no product differentiation, automation has become an imperative in fresh produce packing operations. “In many instances where margins are already compressed, affordable automation can be more effective than implementing traditional lean manufacturing enhancements which tend to only deliver incremental efficiency improvements. Especially when labour input costs are rising higher than fresh produce commodity prices,” notes David Jahn.

Not only does the reduction of manual work streamline packing processes, it also reduces waste and improves worker safety. Flexible machines which can be adapted to seasonal produce and future packing and product applications further increases their viability, with less risk.

Due to the success of this installation, Will is considering automating case loading on all 16 carrot lines, potentially creating a dedicated parsnips line too.

Will concludes: “We have been thrilled by the speed in which Brillopak engineered, installed and integrated all the upstream electronics. Within a couple of hours our carrot case loading machine was up and running and hasn’t stopped performing since. The level of communication throughout the project was exceptional and I don’t recall ever having a machine with this level of complexity run so well from day one.”