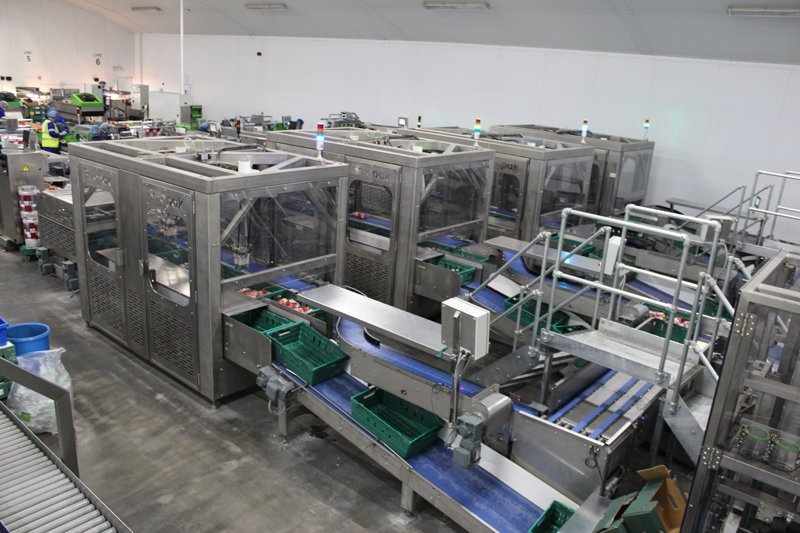 The project saw Brillopak install two PAKStations, four UniPAKer robotic crate packing systems, four Crate DESTAKers, two bale arm closers, four vertical accumulation units and three robotic palletisers. Thanks to this investment, Adrian Scripps has tripled productivity from 2.5-5 packs to 15 packs per person per min. This has enabled the packing hall to align its capacity with increased production that has come about as a result of replanting orchards, introducing new varieties and adopting new farming methods.

Adrian Scripps’ commitment to automation has earned this family business pioneering status in a sector that is heavily reliant on manual labour for picking, processing and packing.

“In our sector it has been difficult to automate; you might assume that apples flow easily because they are round, but they don’t…and pears are even more awkward, so there are considerable handling challenges to overcome. But we have invested significantly in automation so that we can pack apples more efficiently and it is paying dividends; our productivity per person has been accelerated by robotics,” says James.

From starting life in 1960 as a traditional Weald of Kent fruit, hops and livestock farm, Adrian Scripps has grown into one of the UK’s premier growers and packers of English fruit. Several varieties of apple – Braeburn, Kanzi, Jazz, Opal, Gala, Red Prince and Bramley – along with Conference pears and blackcurrants, are grown on five farms totalling 750 hectares.

As well as being the UK’s largest exporter of apples, the family owned farming business is one of Tesco’s key apple suppliers – a relationship that stretches back more than 30 years and has seen much change in the way that fruit is handled at the company’s centralised packing facility on Moat Farm.

Top of the tree

In a sector that has historically shied away from automation, Adrian Scripps has become something of a trailblazer whilst remaining true to its roots as a family farming business.

Whilst every single apple is still hand-picked, the company’s sorting operation has been automated for over 30 years. Here, fruit is transported through a pre-sizing machine in water channels; letting the apples float like this protects them from bumps, bruising and damage that may result from over-handling. Imaging technology checks the colour, sugar content, internal quality, size and shape of each individual apple, identifying any blemishes and imperfections. Apples are then graded by weight, quality etc. Same category fruit are packed into 300kg plastic crates and transferred to the packaging operation.

“This means that the packaging operation is presented with a uniform product that has already been sorted and graded,” says James.

It is the packaging process that has been the company’s focus for automation in the last eight years, initially with the aim of reducing handling through a linear automated process.

Historically, apples were sold either loose in moulded fibre trays or in plastic bags with a neck tie. Both packing operations were entirely manual, and packing staff worked at a rate of 2.5-5 packs per minute (ppm) on average.

Then, in 2013, Adrian Scripps took the decision to invest in automated flow wrapping equipment, accelerating the speed of the packaging operation.

“That left us with lots of packs coming off the flow wrapper at speed, creating a very repetitive task – that was when we engaged Brillopak, who we knew had experience in automation in FMCGs for the grocery trade,” explains James.

On visiting Adrian Scripps, Brillopak quickly got the measure of the situation.

“Up to three people were trying to manually pack flow wrapped apples into retail crates at a rate of up to 60 per minute per line. The packing operatives couldn’t consistently keep up with the pace, which meant upstream efficiency improvements from their grading and flow-wrap investments were impacted,” recalls David Jahn, director at Brillopak.

“Brillopak immediately understood what we were looking for and very quickly got to grips with the challenges,” says James. 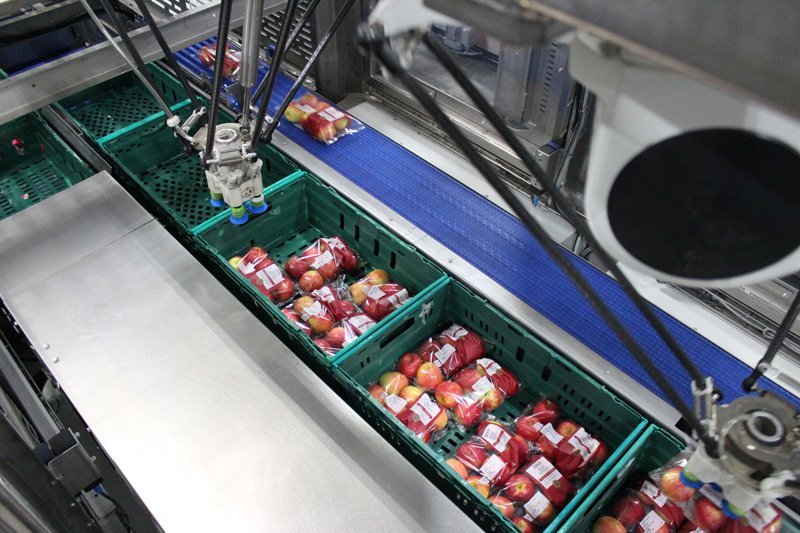 Brillopak’s engineers designed a semi-automated version of the traditional ‘Lazy Susan’ style packing station, which, later branded the PAKStation, was to go on to become one of its best-selling packaging solutions. The ergonomic system, which helps manual staff load packs of fresh produce into retail crates, has significantly enhanced productivity at more than 12 UK fresh produce packhouses to date.

“The PAKStation has made the entire process easier for the person packing. Historically, packs were presented to packing staff on a Lazy Susan rotary table, which allows a large area for crates to accumulate. We wanted a solution whereby crates were presented to the operator without accumulation, so that the pace of packing is dictated by the machine rather than people,” says Simpson.

The PAKStation gave Adrian Scripps a flexible semi-automated solution on two of its four lines. However, with the vast majority of the company’s production in one single format, and volumes increasing year on year, it wasn’t long before Adrian Scripps was ready for the next automation chapter – upgrading its other two lines to a fully automated workflow and installing two completely new packing and palletising lines.

He continues: “We knew we had a lot more fruit coming into production between 2018 and 2022, so we needed our packing facility to be able to accommodate this. In 2013 our facility processed approximately 30,000 boxes of apples and pears every week, each containing 10-12kg of fruit. Now typical weekly production is 80-100,000 boxes a week.” 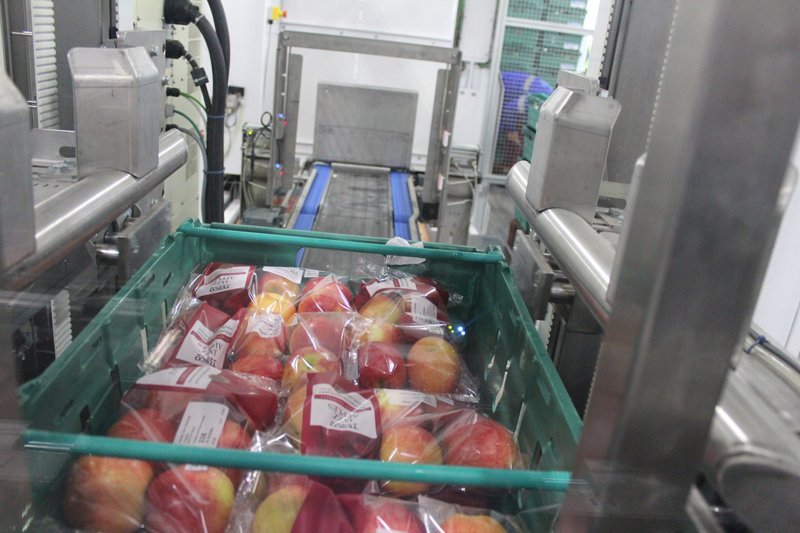 The company considered other packing systems, but it was the inherent flexibility of the award-winning UniPAKer robotic crate packing solution that once again convinced Adrian Scripps to partner Brillopak on this project.

“We looked at mechanical systems where the pack is turned to orientate it, but the flexibility of the UniPAKer won us over – it is infinitely programmable and allows you to make very small adjustments to get the pack to the exact target location,” explains James.

Each of the four UniPAKer crate loading cells at Adrian Scripps houses two delta type robots, each performing a single pick. The benefit of a single pick is that it eliminates the need for accumulation. To maximise packing speed, the crate is dynamically loaded as it is moving;  working alongside each other, the robots take it in turn to partially fill the crate, picking individual packs off the infeed conveyor and positioning them deftly and precisely in the crate at the programmed orientation. The robots perform this task with a degree of dexterity and rotation that would not be feasible with a layer-based automated handling system.

Many robotics suppliers shy away from applications involving delicate fruit such as apples, as they bruise very easily. The speeds required to achieve target paybacks cannot be met without unacceptable levels of product damage, rendering some automation projects unfeasible.

“Apples are not an easy fruit to handle because they bruise very easily. This, combined with the need to execute a range of crate patterns, made this project a challenge that couldn’t be met by a mechanical system. Brillopak rose to the challenge,” says James.

Case for DESTAKer stacks up

Each UniPAKer is fed by a Brillopak Crate DESTAKer, an automated crate destacking solution that works on a unique operating principle; rather than picking up the entire stack and relying on gravity to despatch the bottom crate, the Crate DESTAKer clamps the bottom crate down, lifts the rest of the stack up and then despatches the bottom crate. This prevents two crates from being despatched simultaneously in error if they get stuck together.

When reducing the amount of labour on a line, additional controls are often needed at certain locations. At Adrian Scripps, after the packed crates leave the UniPAKer, they converge onto a single conveyor and pass through a bale arm closer.

“If the bale arm is broken or out of position, the crate won’t stack properly on a pallet. In an automated workflow, you can’t afford to compromise efficiency or stack stability with crates that aren’t intact,” says David.

On the bale arm closer, fingers push the plastic bale arm into closed position; four cylinders then come down and apply pressure. If there is no resistant force, this means the arm is broken or out of position. 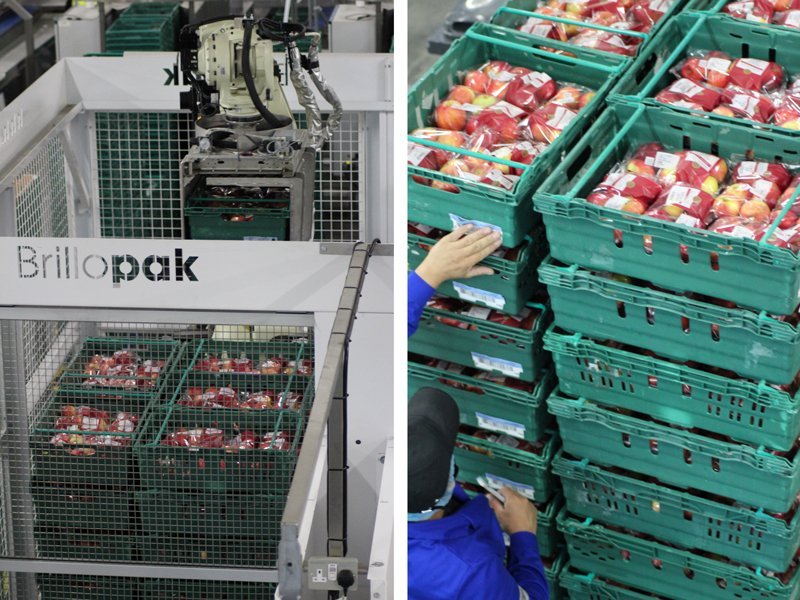 Left: Brillopak supplied three compact robotic cell palletisers capable of operating at a rate of up to 30 crates per minute.
Right:If Adrian Scripps hadn’t purchased the palletisers, they wouldn’t be seeing the benefits that they are from the rest of the automation

Each line also incorporates a vertical accumulation unit just before the entrance to the palletiser. When there is a pallet changeover, instead of crates passing straight from the UniPAKer to the palletiser, the accumulation system lifts them vertically upwards. When the palletising robot is ready to accept its next load, it lowers the crates back down onto the track.

“When a finished pallet is removed from the line, there is a lag of 26 seconds before the robot is ready to start working on a new pallet load. The principle of this vertical accumulation system is simple but it eliminates the need to stop the line whilst the palletiser catches up with the rest of the workflow,” says David.

The final element of the project was the palletising operation. Brillopak supplied three compact robotic cell palletisers capable of operating at a rate of up to 30 crates per minute.

Besides its smaller-than-average footprint, the beauty of Brillopak’s palletising system is that the whole operation can be managed with a handtruck rather than a forklift. Empty pallets are delivered via handtruck to the inbuilt pallet dispenser, which automatically feeds them to the machine for presentation to the Nachi articulated robot. The system then automatically places the loaded pallet stack onto the floor to be taken away by a handtruck. For maximum efficiency, Brillopak’s compact palletiser accommodates two pallet stacks side-by-side. When one stack is full the cell door slides open and the full pallet is removed.

To maximise efficiency, all the machines in the workflow communicate with one another via sensors and a common control platform. For example, the Crate DESTAKer will only release another crate when it receives a signal from the UniPAKer.

Adrian Scripps now has a fully automated crate packing operation with six packing lines each capable of running at up to 75 ppm, giving the company the capacity uplift it needed.

The packing facility employs 55-60 staff – and even though throughput has tripled this figure hasn’t changed in many years, which clearly demonstrates the effectiveness of this approach.

Other metrics underline the success of the project too: whilst labour is 35% more than it was five years ago, Simpson says that cost per pack has come down. Whilst he concedes that other factors, such as reduced pack rates, have contributed to this, improved economics are a direct result of the company’s investment in automation.

James says that taken individually, all the different elements of the project will have different payback periods.

“The palletisers, for example, are one of the most expensive pieces of kit, and because they don’t entirely remove an operator, they are slow to pay back. Other parts of the line, such as the UniPAKer, pay back more quickly, as each UniPAKer cell is an immediate replacement for two operators.”

He continues: “But just because a system doesn’t pay back quickly doesn’t mean it is not worth the investment. If we hadn’t purchased the palletisers, we wouldn’t be seeing the benefits that we are from the rest of the automation.”

James concluded “You can honestly trust Brillopak. A British company, on our doorstep at the forefront of their field. They’re innovative, proactive and delivered everything we asked. We couldn’t have worked with a better partner on this project”. 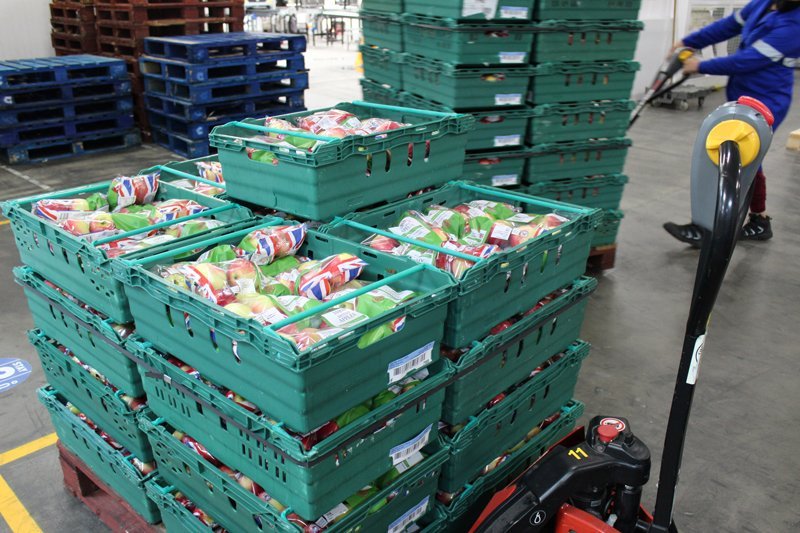